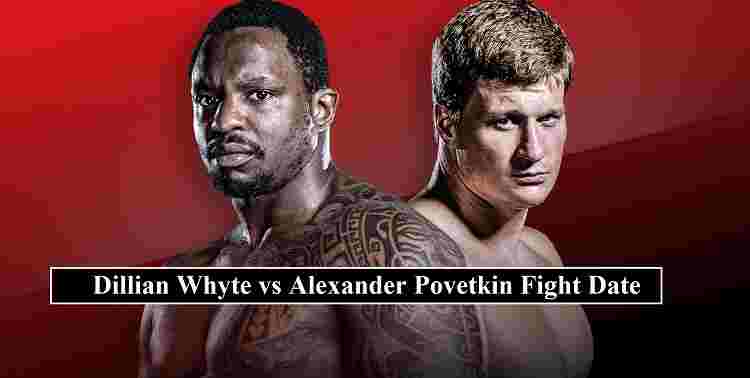 Boxing fight dates and venues changed, interim WBC heavyweight title which is schedule for June and July changed to August 2020. This happens after covid-19 pandemic. Now recently the fight re-schedule according to boxing news sources Dillian Whyte fight with Alexander Povetkin in August 2020. There are no reports announced either fans allowed to watch it in arena or not. Whyte Povetkin fight held on 22nd August 2020.

Dillian Whyte who made professional debut in heavyweight boxing in year 2011. Dominate his opponents in 20 fights while suffered only a single defeat in his career so far from (Anthony Joshua). Whyte currently holds contract with Match room boxing the contract worth not revealed yet but he will earn title shot after signing contract. A source revealed that, while signing the contract under the terms of deal he would be in the line to face world heavyweight boxing champion (Tyson Fury) in future.

This fight is a great chance for the Russian heavyweight boxer (Alexander Povetkin) to earn massive pay-per-view fight in future. He recently lost his fight from the American opponent (Michael Hunter). Before that, Povetkin defeat High Fury and become the new champion (WBA International heavyweight) division. Both boxers get extra-time to train, the fight held in UK at (Matchroom Fight Camp) at Brentwood.

If there any changes made to the current Whyte Povetkin fight date, the details updated here later. This is the biggest pay-per-view fight going to take place after months break in boxing.