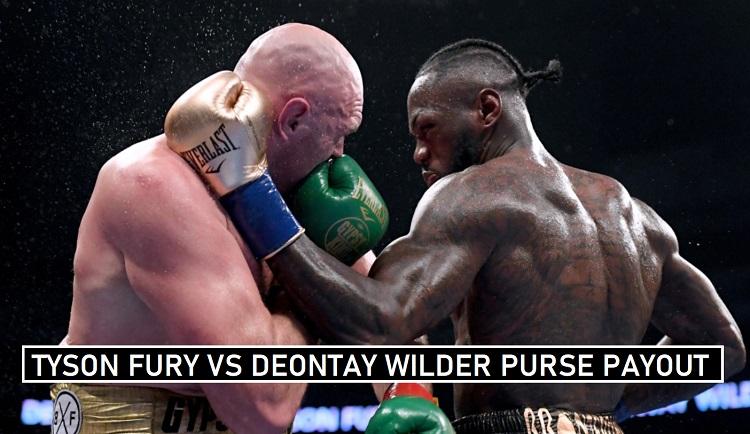 Tyson Fury taken on Deontay Wilder in re-match fight February 2020. The fight confirmed and held at (MGM Grand Arena) at Las Vegas USA. The purse money not decided but both of them earned bit more from the previous fight. TV channels rights for the upcoming fight also increased. Fury Wilder purse payouts for the second expected to rise compare to first fight.

The purse money for both boxers in rematch based on sale of pay-per-views. If the pay-per-view sale’s increased 1 million both fighters earn in double figures. If it happen this time Tyson Fury earn ($10.5 million) and Deontay Wilder earn ($11.5 million). Fury Wilder purse payouts reached these figures make it most expensive boxing fight of 2020.

The above purse payout detail is not official yet. The payout money for both boxer’s depend on their pay-per-view sales revenue. Which is later split 50% each between both boxers. Fury and Wilder both create buzz in sports circles.

Tyson Fury Guaranteed Purse ($5 million) : Fury make $5 million guaranteed purse money from the fight and he will earn more from the pay-per-view split revenue which is (50%). According to reports estimated PPV revenue for the 2nd fight ($77 million). Which means both fight received $25 million. If fury win’s the fight he will earn 60% in third fight pay-per-view fight.

Deontay Wilder Guaranteed Purse ($5 million) : Wilder make massive money from his rematch fight against Fury. His guaranteed purse is $4 million in first fight and 2nd fight estimated purse is ($7 million). He will make 50% from gateway income and pay-per-view revenue which will bring $25 million more to his account. Currently these are estimated purse based on reported pay-per-view sales and gateway income on fight date. The official purse payout details updated here later including pay-per-view revenue.

The seating capacity at MGM Grand Arena is maximum upto (17,000) people at one time. Ticket price bit higher this time from the previous fight because of less seating capacity compare to Staples Center in 2018.

Re-Match Purse Split: The final purse money is 25% more than guaranteed offered. The tv rights money added to the deal of US and UK main pay-per-view event on 22nd February. The split share of purse money will be 50% to both which means Fury will take ($10.5 million) and Deontay Wilder take ($11.5 million). The above purse money only paid if the ppv sales reached expected target.