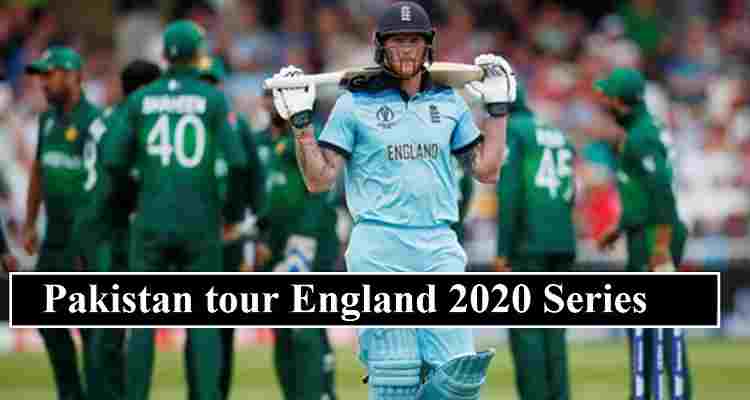 Pakistan tour to England confirmed, after months of break in cricket events due to corona-virus. It is not confirmed yet that fans will able to attend matches. So far mostly sports events including football, mixed martial art fight, boxing take place behind the close doors. Pakistan tour to Ireland confirmed but once the corona-virus spread, series postponed, but green signal given for England tour during July to September. Pakistan England schedule 2020 based on three test and three t20 matches.

The test matches quite important for both side, the winning team will earn points that help them to get improved in ICC test championship ranking which still on going. Babar Azam lead his team as skipper on in test matches and t20 matches. Shaheen Shah Afridi, Azhar Ali, Shadab Khan, and Naseem Shah key players to watch in England tour this upcoming month.

In the above table you can see the current details Pakistan England schedule 2020 three test and t20 match series. The details will be updated here if any changes made to the current fixtures. England will be playing their second series in row during the corona-virus pandemic with behind close doors. Before Pakistan cricket team, its West Indies who tour to England from 8th July to 28th July to play series.

Jos Buttler leads his side in the series against West Indies and Pakistan. Eion Morgan, Ben Stokes, Jonny Bairstow, Liam Plunkett, Jofra Archer, and James Anderson hold great bowling and batting records against Pakistan. They have recently won all matches at home grounds in 2019 against Pakistan. Pakistan may change few players for the series after PSL season 2020. Many new players emerge, Muhammad Hussnian will be the surprise entry if got selected for the series.

In Pakistan, all matches broadcast live on (PTV Sports) and Sky Sports hold coverage right of England cricket matches. More channels information will be provided a week before series began.