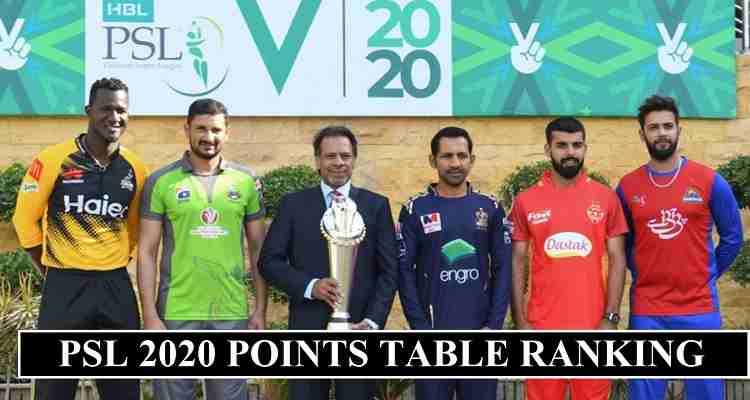 PSL 2020 become second most watched cricket league In Asia after Indian Premier League. This year Pakistan takes further step and hold all matches in the country. PSL 2020 mostly dominated by Quetta Gladiators, Islamabad United in past few season. PSL 2020 points table is currently lead by Quetta Gladiators with 6 points and after them it’s Multan Sultans with 4 points.

Quetta Gladiators dominating once again in the PSL 2020 season. They have played 4 matches and won 3 of them while suffer lost in 1 match since start of tournament. Multan Sultans played 3 matches so far in the Pakistan Super League 2020 season 5, and dominate in 2 matches and lost 1 match against (Islamabad United).

The PSL 2020 points table updated after each match. Currently there is no match drawn between any of PSL teams. Multan Sultans leads the points table according to net run rate with (+0.914). Lahore Qalendars once against facing issues in all their fields bowling, batting and fielding. They played 2 matches and lost both of them.

Peshwar Zalmi who are the favorites for the tournament alongside Islamabad United and Quetta Gladiators did not perform well in the opening fixtures of PSL 2020.