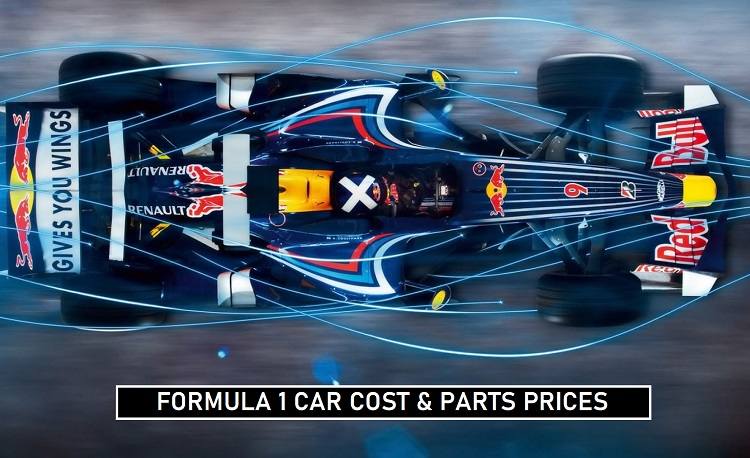 Formula One expensive racing sports in the world. A single accident on the tract cause million dollar expense. FIA made couple of big changes to the Formula 1 cars design. All teams have to follow the rules and regulations set by the FIA for the upcoming season.

Eddie Jordan explained that (£100,000) estimated cost of replacing nose cone and front wing or back wing if damage (Bleach Report). In last five years the price for fixing the nose cone, front or back wing increased to (£500k). It depends on the F1 team’s how much they want to spend on the car quality parts.

In the above table you can see the prices how the cars maintain for the racing. Engine unit is one of the most costly part in Formula one. Teams like Ferrari, McLaren, Renault and Red Bull look for the best engine for their F1 cars. If the big teams like Ferrari and Mclaren spend money in the development of the car they received big F1 Prize money bonus share at the end of the season.

Cost of Engine ($7.5 million): Formula one teams spend millions of dollars to bring best technology to their cars engines. A report in 2018, revealed that $10.5 million is actual cost of engine. But BBC sports report in 2013 and Bleach Report revealed details of engine cost upto ($7.5 million). Top teams F1 like (Ferrari, Meclaren and Red Bull) demand engine’s from top manufactures such as (Honda and Toyota). Honda not only participate in the race but they are one of the suppliers of engine.

Cost of Front & Rear Wing ($500,000): The rear and front wing cost increase if it’s totally damage. Mostly during the race with a small crash it just separated from the car. According to 2013, report $150,000 required to get a new front or rear wing. But in 2018, (TSM sports) reports revealed almost ($500,000) required for the front and rear wing. How much accurate their sources its difficult say at this moment. But BBC reported (£50,000) is required to have new rear or front wing.

Cost of Gearbox ($1 million) Formula 1 cars used semi-automatic sequential gearboxes that helps them to generate accurate speed. The proper setup of hydraulic system for power shift and clutch operation helps car to reach maximum speed during the grand prix. The cost of gearbox preparation is between $650,000 to $1 million. It depends on the F1 team’s management how much they want to spend on their cars.

Cost of Cooling System ($300,000): Cooling is the charged air helps to cover up the heat that is compressed due to Turbo. Inter cooler system helps the car to maintain the heat level during the race. This system cost F1 teams in ($300,000). A website (GP Auto) revealed that $150,000 paid for proper cooling setup for Formula 1 cars in 2013-14 racing season.

Cost of Transmission ($200,000) The purpose of transmission system in F1 car is to reduce the gear shift timing. F1 cars use semi-automatic sequential gearboxes with regulation stating 8 gears (7 gears to increase the speed and 1 gear is must for reversing the car. F1 teams have to follow the rules and regulations before making any changes to transmission of the car or gears or else they face penalty for five places drop on the starting grid.