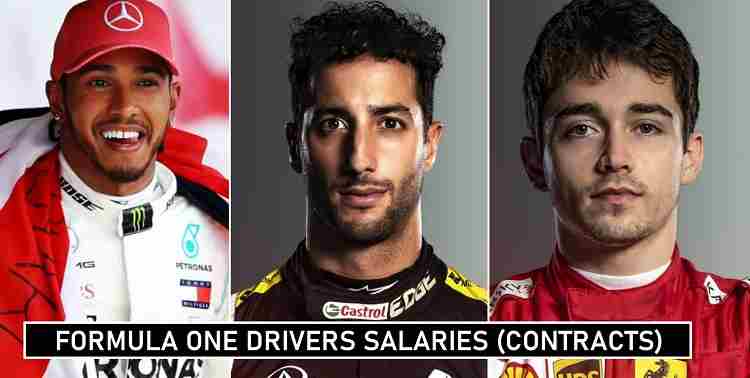 Kimi Räikkönen break all records in 2007 after signing three years contract deal with Ferrari F1 team. He earns $51 million per year his contract worth of ($153 million) which bring his name among the highest paid drivers and athletes worldwide in 2009. A news website in 2018, revealed the Formula 1 drivers salaries.

The professional drivers in Formula sign new deals and shuffle from one team to another with 1st driver opportunity. According to public report in 2019, formula 1 drivers salaries 25% increase in past five years. Lewis Hamilton currently highest earning Formula 1 driver on annual base salary. In 2018, Hamilton signed two years contract deal with Mercedes Meclarn F1 for ($51 million a year) $100 million total value of contract.

Daniel Ricciardo Annual Salary ($34 Million):This might be Daniel Ricciardo last season with Renault F1 his salary reported to (£26.5 million) a year according to UK news sites in 2019. Currently no official confirmation about his extension of contract with team released.

Max Verstappen Annual Salary ($12.5 Million):In 2018 Max Verstappen salary reported (£3.5 million) news sources. In 2019, a website revealed the salaries of Formula 1 drivers according to them he earn ($12.5 million) a year contract till 2020. He did not extended his contract with Red Bull F1 team but hopeful to win Formula drivers championship 2020 season.

Lewis Hamilton ($60 million) annual salary remain the highest paid driver in F1 2022 season. Some drivers did not signed extension contract and after 2020 they are looking for better deals. Max Verstappen driving the last season for the Red Bull racing team.

The financial information of all drivers salaries and contract extension collected from top sources of Formula 1. There might be changes to the drivers line-up as some team prefer to give rest to F1 driver and called third drivers for the grand prix. Any major changes to salaries or contract updated here.