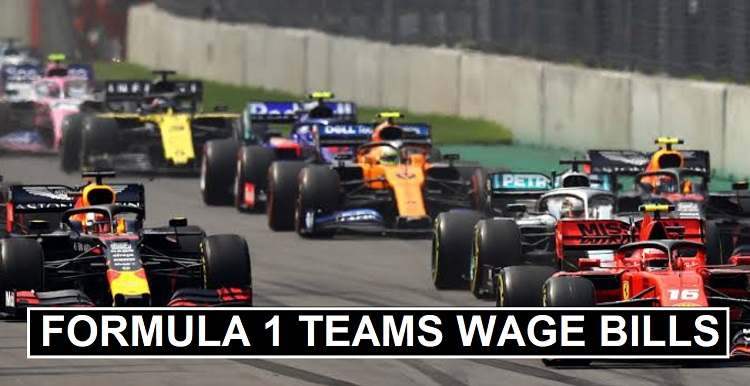 Formula One becomes most expensive sports in the world. The annual budget for the F1 teams increased each. A research report recently revealed the wage bill for the F1 season increased upto 80% according to Forbes Report. Mercedes spend the most of money on advanced technology and staff wages (£87 million). F1 Teams Wage Bills for 2022 reported a month before the race.

Highest wages increased the staff members in 2007, there are (507 members) which increased upto (657 members) in 2019. According to (AutoCars) reports more members in the staff increase the chances of success increased.

In the above table you can see the total wage bill for F1 season 2019. Mercedes leading the list with almost £90 million. But with this wage bill of staff they are also getting results as their driver finished 1st and 2nd on points table. Mercedes lift the constructors championship with 739 points.

The 2nd most spending team in staff wage’s is Red Bull Racing team. Their yearly wage bill increased from £50 million to £82.5 million. They are looking to develop a better car and team for the upcoming season. Red Bull Racing Finished at 3rd place in 2019. The average wage bill of Formula 1 team is (£35.5 million).

Hass F1 team listed with lowest wage bill. According to report published on Forbes magazine the wage bill of Hass F1 (£5.5 million). Some sources claimed that in 2021 the staff wage’s increased upto (£100 million). If this happen than F1 will become the most expensive sports racing in the world.

A major difference in the staff wages and formula 1 teams expenses year 2019 and 2007. The average staff members wage of 2019 teams is equal to the highest staff wages of 2007 f1 teams. Expenses increased because many new advanced technologies bought by the f1 teams. Now teams with more staff have more chance winning the race and competition.

Red Bull Racing, Williams and MClaren recently increased their budget, they bring new technicians and mechanics to develop better racing cars for the upcoming season. Almost each team pit crew staff salaries were double because no team want’s a slow pit stop during the race. You can checkout the salaries paid to F1 pit crew members in 2022.