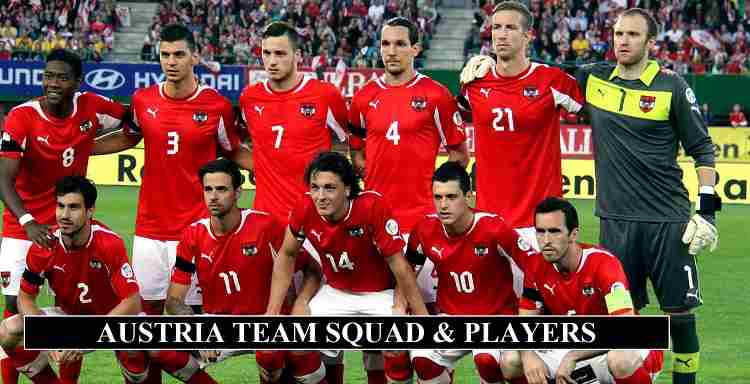 Austria qualified for the Euro 2020, and drawn in group (C). The team performance improved in each Euro 2020 qualifier match. Many new players from call-up players list selected for the Austria team squad. Marko Arnautović performance and goals secured the position of Austria for Euro 2020.

Austria team squad based on 23 players officially submitted on 15th May as per sources from football confirmed. David Alaba, Martin Hinteregger, Alessandro Schöpf and Marcel Sabitzer currently listed in the call-up players list not in the starting XI. They recently selected for the North Macedonia match.

Once the official team squad of Austria, for Euro 2020 announced. All players information in the above table updated here. Austria drawn in group (C) of Euro 2020 where they play against Ukraine and Netherlands. Austria all fixtures before Euro 2020 announced which include warm-up and friendly matches. Possible changes based on players injuries might take place.

Some of the Austria players seen in action before the Euro 2020 first match. Recently, two Euro warm-up fixtures for Austria announced. On 2nd June Austria host (England) and on 7th June they will host (Czech Republic). Before these warm-up fixtures, Austria play friendly matches with Wales and Turkey.