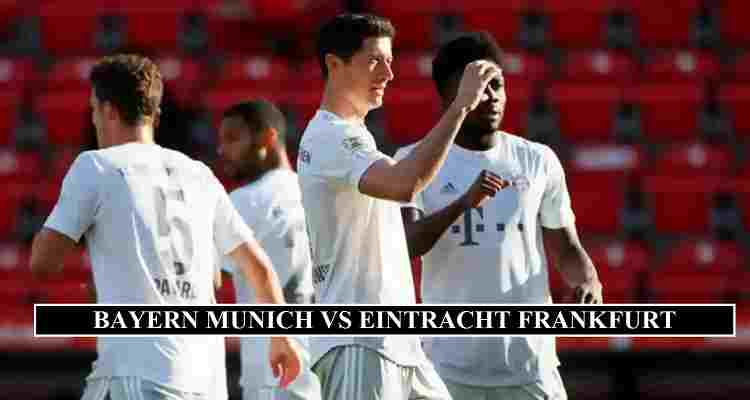 The 2nd week of Bundesliga fixtures confirmed. Bayern Munich facing Eintracht Frankfurt in their upcoming schedule. After dominating opponents (Union Berlin) Eintracht Frankfurt will be a tough challenge for the league leaders. The points gap between Dortmund and Munich only 4 points, a single defeat or draw can cause them league title. Upcoming fixture of Bayern Munich against Borussia Dortmund, that will be title decider between both. Bayern Munich Eintracht Stream channels DAZN, Sky Sports Bundesliga hold the officials right for the match in Germany and Austria.

The team line-ups confirmed for 23rd May fixture for Bayern Munich. The two players Philippe Coutinho and Corentin Tolisso will miss this fixture due to injuries. Serge Gnabry who started previous game against (Union Berlin) doubtful to start on Saturday against Eintracht Frankfurt. Robert Lewandowski will start and currently inform player. Thomas Müller and Leon Goretzka will backup the Polish forward.

Eintracht Frankfurt, after suffering 3-1 defeat from Monchengladbach last weekend, increase their chances of relegation. The points gap between Augusburg, Dusseldorf, and Mainz not much left behind. If Frankfurt lost this match from Munich, they will move to 15th place three points ahead of Dusseldorf. The away record of Frankfurt not good, from last 36 points, they only get 7 points. They are among 4 clubs who beaten Bayern Munich so far in Bundesliga.