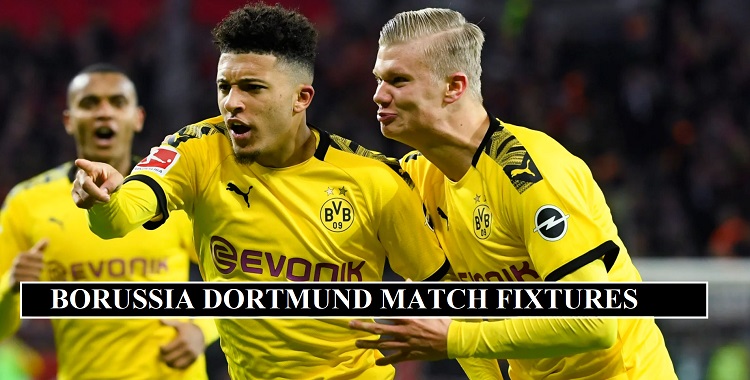 Borussia Dortmund football fixtures for the upcoming season will be announced soon. But before that club, announced their pre-season friendly matches. According to reports, Dortmund players return to the training camp for the upcoming season 3rd August. Before the league kickoff, they will travel to Switzerland to play pre-season friendly matches. Borussia Dortmund Fixtures 2020-21 confirmed.

The first pre-season game take place on 12th August against (SC Altach) in Altach, Austria. There is another friendly schedule of Borussia Dortmund with Austria Bundesliga club but the opponent details not revealed yet, but date for the match is revealed, it will take place on 16th August. After first two friendlies, there is DFB Pokal match schedule with (MSV Duisburg) take place in Duisburg, Germany. Further details about Borussia Dortmund fixtures 2020-21 provided in the given table.

All information regarding to Borussia Dortmund pre-season friendlies 2020-21 gathered from trusted sources, if there are any new matches held before the season 2020-21 start from 18th September the details updated here later. Bayern Munich already started their pre-season campaign with Marseille match last weekend and their pre-season complete campaign announced soon after champions league game.

If you can not find any tv channel hold rights of Borussia Dortmund broadcast, BVB-tv official channel of the club broadcast games live and can access through internet worldwide. The details of the Dortmund matches with tv schedule update here.