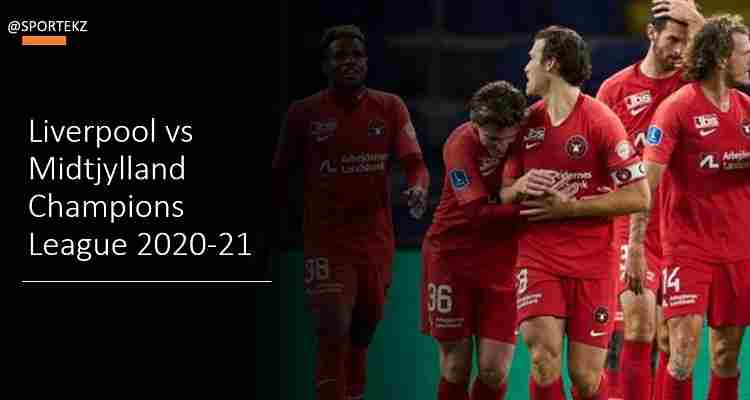 Champions League 2020-21 phase one completed the teams played their first match of the season. Liverpool won their match against team of Ajax and earned three important that helps them to climb the second place in the points table behind Atalanta B.C, their next match schedule with Danish football club Midtjylland. Liverpool Midtjylland stream channels for the champions league 2020-21 group match confirmed.

Liverpool made major changes to their squad after Virgil Van Dijk out for the season due to injury. Keita may joined the club this weekend after leaving three fixtures due to test positive for the corona-virus. The first team goal-keeper (Alisson) returned to the squad after recovering from the injury. Jurgen Klopp side have tough challenges this weekend they have to play with West Ham in next two days time period. BT Sports hold the coverage rights for the match in United Kingdom.

Midtjylland, earned their spot in champions league 2020-21 after giving some tough competition to the teams in champions league playoff’s, this weekend they another challenge in form of Liverpool, who are Premier league champions and holding one the best attacking midfield in the world. Sadio Mane, Salah, Roberto Firmino three players that can change the score line of the match on Tuesday. After this match, Midtjylland will play against Ajax and Atalanta to confirm their place in next round of 16 of champions league.

In Denmark the coverage of this match available on (NENT), the details regarding to Liverpool Midtjylland stream channels are based on channels that hold rights for the UEFA competition 2020-21.