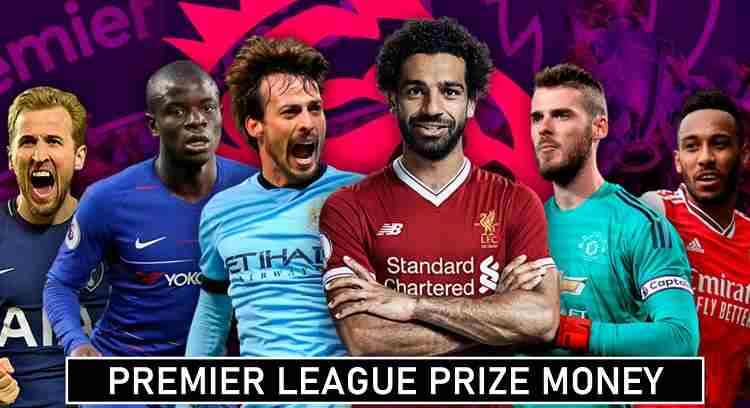 Becoming Premier League champion or finishing in top five position big financial awards given to clubs. The winning prize money for the champions is (£150 million) which increased after including tv rights and merit money. Premier league prize money increased in last four season.

The premier league prize money include broadcasting revenue and tv revenue details comes at the end of the season. It depends how the team finished in the standings. Total £43 million paid equally to all football clubs international tv rights money.

The prize money divided into five categories. Equal share where 50% financial revenue share equally among all teams. The 25% shared based on number matches telecast in United Kingdom. More 25% bonus share paid to club based on positions in league table.

In the above table you can see how the prize money distributed in the season 2019-20. Currently 18 games left in the season it’s difficult to put the details of all clubs central payments regarding to tv rights money, broadcasting revenue and commercial revenue. A month before the Premier league table will be updated with latest updates how much each team earn in 2022.

Central Commercial revenues equally shared to all (20 football clubs). What ever money generated from the International broadcasting equally distributed among the Premier League football clubs. No club can earn extra money in tv rights.

The prize money at the end of the season helps clubs to maintan the balance in the wage bills. Premier league clubs wage bill’s increased with each transfer in summer and when player demand expensive contract on higher wages.