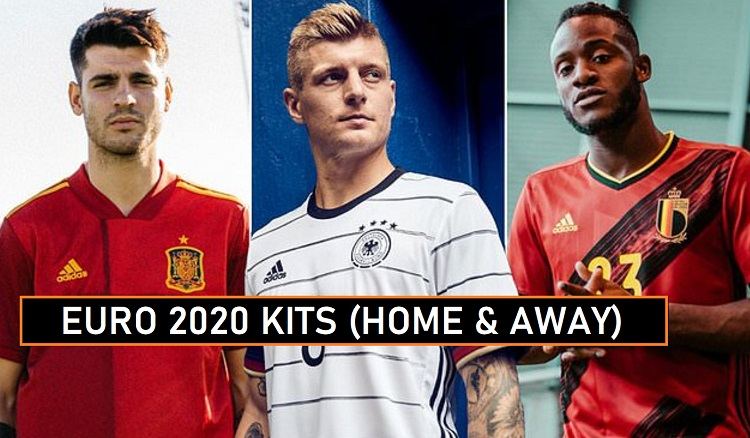 UEFA Euro 2020 the major tournament held among the top 24 teams of Europe. All team’s looking forward to released their kits before the event. Many teams kits were leaked online. Just before the year 2019 going to end many teams away and home UEFA Euro 2020 kits revealed online.

According football new’s sites Adidas and Puma released half of their kits months before Euro 2020. Nike and other kit manufacturers released official kit details closer to the month of March. The kit details taken from trusted sources. Reports, about UEFA Euro 2020 kits official released date said to be month April & March 2020.

Austria revealed online, comes with a unique design and color combination of sea blue and black. Puma are the kit makers for the Austria (home and away) for Euro 2020. The logo is visible and comes with black, white and red edition.

Belgium home and away both kits revealed online. The home kit comes with red edition black stripes in multiple design can seen on the shirt. Three color’s used for the home kit design (Yellow, Black and Red). Adidas bring a unique style of stripes both red and black in front. Currently it’s not official kit’s But in next one month official kits for Euro 2020 will be confirmed. The away kit featured in white color, there is two line red stripe’s design on the shoulder and logo of Adidas printed in black color.

Sweden qualified for the Euro 2020, their kit’s for the European championship designed by Adidas. The home kit recently revealed online featured in Yellow color have two stripes on the arms (dark sea blue and sky blue color). Three black color layers stripes on the shoulders and Adidas logo also printed in black color.

Adidas are the official kit makers for Spain team shirts. The home shirt of Spain comes with red color featuring yellow three stripe design on the shoulder and logo’s printed in yellow color. The away kit of Spain for Euro 2020 said to be in White color logo’s printed in red color edition and stripes designs on arms is just like Spain official flag.