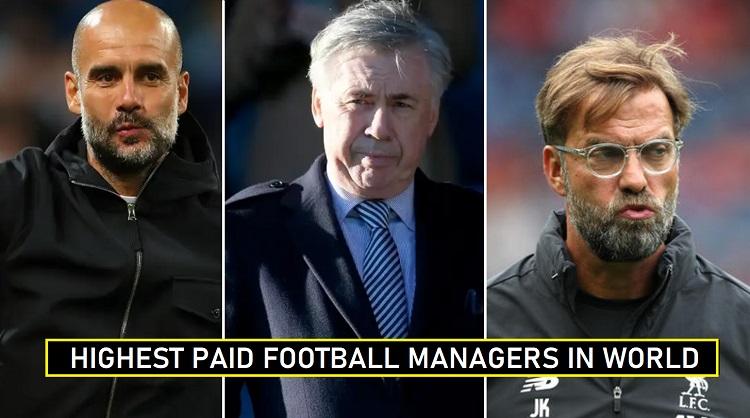 Many football clubs looking to extend the contracts of their club managers. In 2020, start we might have some major changes in highest paid football managers. Bayern Munich currently playing matches with interm manager (Hans-Dieter Flick) in 2020, club might signed new deal with him or bring new manager.

In the above table you can see the salaries of the highest paid football managers in the world. The list currently lead by the Manchester City manager. Ernesto Valverde and Carlo Ancelotti two new managers who signed the most expensive deals that bring them top of the list.

A report published in 2017, highest paid managers which is lead by Pep Guardiola and Jose Mourinho manager of Manchester United second highest paid in the list. In 2018-19 season many managers sacked and signed with different clubs. Jose Morinho currently manager of Tottenham football club with £7.5 million on four year contract deal.

Pep Guardiola signed his contract deal with Manchester City football club in 2017 for three years. His contract details revealed online according to which he earn (£15 million basic salary). Guardiola contract worth of (£50 million) which include bonus for winning league and champions league competition.

Carlos Ancelotti signed a new contract deal for four years with Everton. According to Express UK and “The Sun” report he get paid (£11.5 million) per year and extra £2.5 million to retain Everton in Premier league. Ancelotti after leaving Napoli becomes 2nd highest paid manager in the world.

Ernesto Valverde recently extended his contract at club for one more year deal till 2021. Tribuna reported that €24 million annual salary of Ernesto Valverde. According to (TSM Sports) report, he’s the best paid manager in La Liga and Europe with this salary. Valverde earn €2 million per month reported (L’Equipe).

Zinedine Zidane is the current manager of Real Madrid. In 2017, his salary for club revealed online according to which he earn (£10.5 million) a year. In 2017, after joining the club he signed two and half year contract deal which going to end soon.

Barcelona after losing 8-2 from Bayern Munich sacked their manager (Quique Setién) and recently on 19th August Club announced that Ronald Koeman signed 2 years deal with club until 2022. Barcelona, managers salary is between (£14.5 million – £10 million) a year.