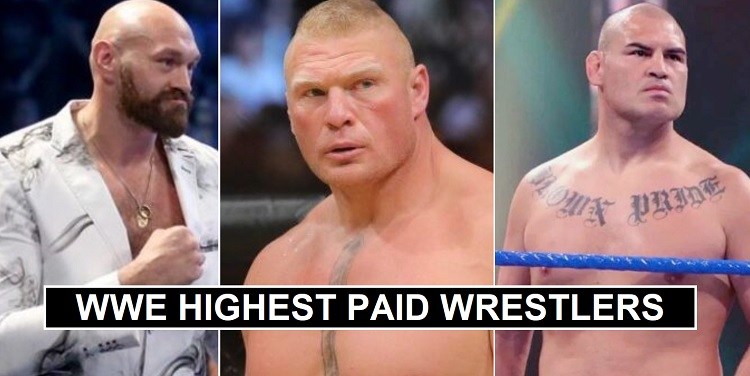 WWE is one of the most watched wrestling sports. Recently it become popular in Arab and Asian countries. Saudi Arabia and India both host events in their country of world wrestling entertainment. Brock Lesnar catch spotlight after signing a new contract with WWE become the highest paid wrestler with $12.5 million annual contract.

John Cena most popular wrestlers of all time is currently making limited appearances. Cena rate among 2nd highest paid wrestler in WWE. Out team has collected data about wrestlers salaries and their contract extension. Here you see all details about currently highest paid in WWE SmackDown and Raw.

The above details of wrestlers taken from trusted sources based (blogs, websites, news and forums). Currently highest paid wrestler is recently boxer turned wrestler (Tyson Fury) with $15 million. Fury with one appearance in WWE Crown Jewel against Braun Strowman earn big money. WWE diva’s earnings way less then male wrestlers. Fury and Lesnar both earn more than $10 million a year while top wwe diva earn $1.5 million (Link) which don’t include any bonus as per sources confirmed.

Currently WWE is looking to sign him for limited appearances. The other big name that joined the highest paid list mixed martial arts fighter Cain Velasquez. He made his debut alongside Rey Meysterio taking on Brock Lesnar to whom he defeat for UFC title.

Tyson Fury made only one appearance in WWE against Braun Strowman and earn (£11.5 million) as per rumored become highest paid boxer in WWE. Some reports claimed that WWE again approached him to make another appearance on Raw or Smack Down.

Brock Lesnar make comeback to WWE in 2017. He won the WWE Championship after defeating John Cena. He become the highest paid wrestler during that year according to the Forbes Magazine report with annual contract salary ($12 million). He is looking back to return to UFC in future.