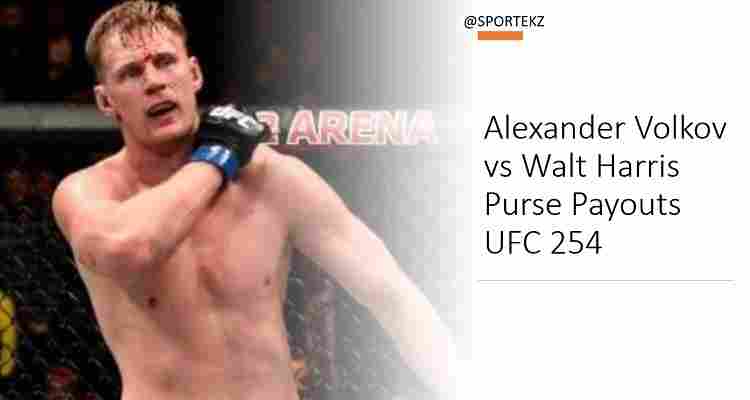 The UFC 254 fight card announced, Alexander Volkov made to the main pay-per-view card of fight island, where he will face Walt Harris. There are no more changes made to the current fight card of UFC 254. Match TV will broadcast the fight Volkov in Russia. Volkov Harris purse payouts for UFC 254 based on their contracts reported.

Alexander Volkov who is currently hold professional record of 31 fight wins out 39 mma bouts. He recently got defeated from Curtis Blaydes at UFC Vegas 3 fight card. A report revealed after UFC Vegas 3 event completed, that claimed, Volkov earned $75,000 guaranteed purse money for the fight. Another mma news sources claimed that he will make $85,000 guaranteed for the fight against Walt Harris.

Walt Harris returned in the month of May 2020, he faced one of top heavyweight fighters (Alistair Overeem) who defeat Harris in the second round. After the fight completed, Harris purse reported $75,000 guaranteed and overall earnings exceed to $85,000 including ($10k) promotional bonus. His upcoming fight schedule main-card event of (Gaethje vs Khabib) at UFC 254.

The detail information regarding to Volkov Harris purse payouts at UFC 254 fight card, updated here once the event completed including promotional bonus and performance of the night bonus if any of them got awarded.