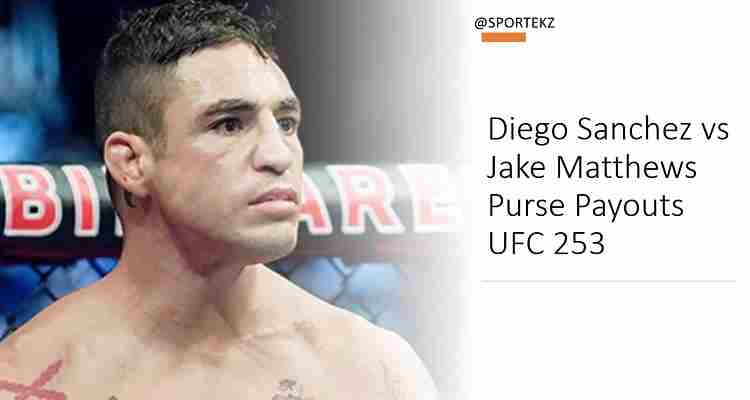 UFC 253, fight card announced. The event this week take place at UAE, Yas Marina Bay (fight Island). The main event headline is fight between Adesanya and Costa for the middleweight championship. Diego Sanchez fight confirmed and his opponent at UFC 253 will be (Jake Matthews). Sanchez Matthews purse payouts based on their contract terms with UFC.

Recently it’s been confirmed that gateway income have no impact on the fighters salaries and contract deal with promotion. Diego Sanchez return to the UFC ring after six months break. He recently won his fight against (Michel Pereira) at UFC fight night 167. After the fight a source reported fighters payout according to their data, Sanchez earned $225k.

It’s second fight of Jake Matthews in year 2020, he recently dominate against (Emil Weber Meek). He earn $60k guaranteed money which include ($30k to show and $30k winning bonus). In the above table details regarding to both fighters Sanchez Matthews purse payouts collected from trusted sources.

The detail information updated once the fight take place on 26th September including performance of the night bonus details. The fights coverage UFC 253 will be telecast on ESPN+ in US and BT Sports in UK. No money generated this week from gateway income due to covid-19 impacts.