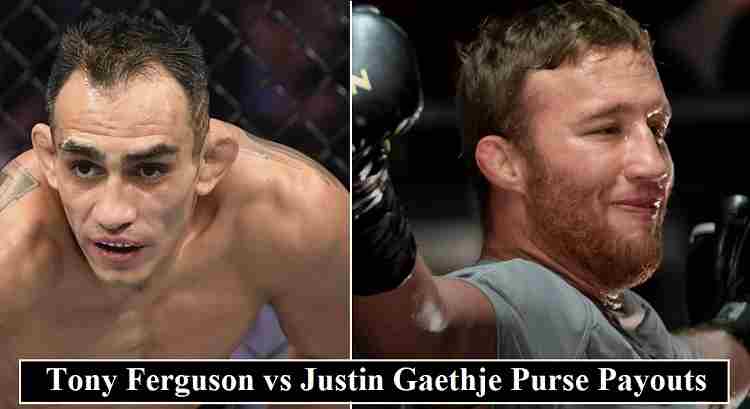 UFC 249 confirmed, the opponent for the main event card announced. Tony Ferguson take on Justin Gaethje. Before, coronavirus pandemic situation Its Khabib Nurmagomedov who will face Tony Ferguson in UFC 249 main event. Ferguson Gaethje purse payouts not announced yet but it depends on how much audience attend the event or it may take place behind the close doors.

The purse payouts information of both fighters for UFC 249 based on reported salaries in their previous fight. Tony Ferguson make career highest money from UFC 249 even if it take place behind the close door.

Tony Ferguson Guaranteed Purse ($500k) : Ferguson received career highest payout against Donald Cerrone in his previous fight at UFC 238. According to reports, Ferguson earned ($235k) in his previous fight which include $10,000 winning bonus and $160,000 guaranteed purse money. He might received $500k straight money for the upcoming fight at UFC 249 and his earnings maximum increased $590k which include $50k performance of the night bonus and $40k sponsorship bonus.

Justin Gaethje Guaranteed Purse ($150,000) Gaethje already in headline before UFC 249 having fight with Conor Mcgregor. But after (Khabib Nurmagomedov) is out of UFC 249 main card, his first fight of year 2020 confirmed with (Tony Ferguson). He earned career best payout from his previous fight against (Donald Cerrone). According to sources, he received ($130,000 to show and $130,000 for winning the fight). His earnings increased to $310k which include ($50,000) performance of the night bonus and $5,000 from sponsorship.

All information regarding to both fighters purse payout gathered from trusted sources of Ultimate Fighting Championship. The details updated later once the fight take place on 18th April 2020.