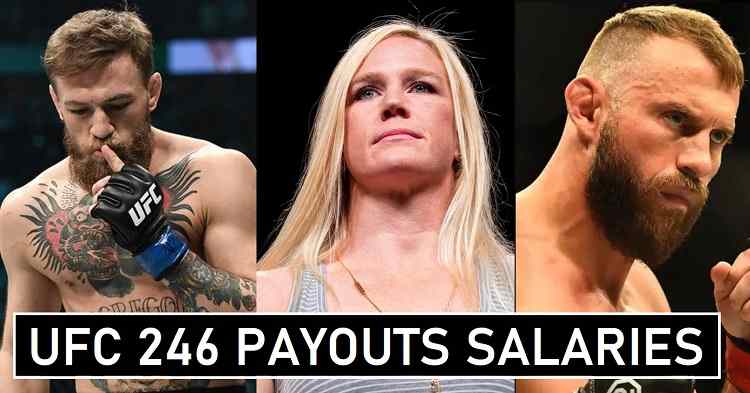 UFC 246 set for the upcoming year 2020 January. Conor Mcgrgor making a comeback to UFC ring after a year long wait. His fight schedule with Donald Cerrone aka (Cowboy). According to MMA sources and news reports this UFC 246 payouts salaries for fighters might break records of all previous events.

Dana White choose T-Mobile Arena where seating capacity is upto 20,000 people at one time. The purse money for the top fighters based on the sale of ppv and gateway receipts. ESPN signed massive coverage deal of $750 million with UFC. The coverage fight telecast on ESPN but no share tv rights money for fighters.

In the given table all salaries based on the reported salaries for UFC 246. Highest earning at UFC 246 is Conor Mcgregor with ($3 million) and Holly Holm joined him in the list with estimated earnings of $350,000 which include winning bonus. The salaries information based on the reports from Sherdog, MMA Mania, Yahoo Sports on UFC 246.

Fight of the night and knockout of the night ($50,000) extra bonus money paid to the fighters who later received the nomination for these two categories. There is a sponsorship earnings for fighters which is not adjusted so far.