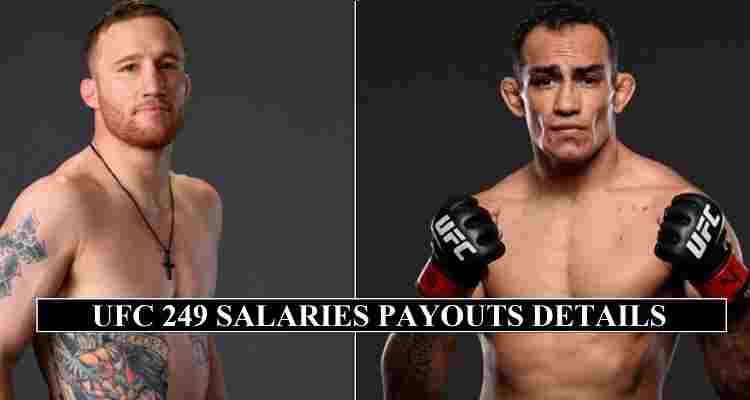 UFC 249 is confirmed and it take place behind the close doors at VyStar Veterans Memorial Arena in Florida, United States. The fights schedule for the 9th May 2020. The main card fight schedule between Tony Ferguson and Justin Gaethje. The other top UFC fighters seen in action in May 2020 are (Henry Cejudo, Francis Ngannou, Aleksei Oleinik and Fabrício Werdum). UFC 249 salaries payouts not confirmed yet, but a report revealed that Ferguson make $500k straight from the UFC 249 main card.

It’s first UFC event taking place after short-term break due to corona-virus pandemic. No details released how much money paid to the fighters from promotional bonus. But fighters money increased once they got selected for the fight of the night bonus and performance of the night bonus upto ($50,000). UFC 249 salaries payouts details gathered from top trusted sources of MMA and UFC.

Francis Ngannou, Henry Cejudo, Jeremy Stephens, Dominick Cruz and Greg Hardy all made to the main fight card. Once the main card fights complete the financial details of all fighters based on the guaranteed purse money and winning bonus updated here. Donald Cerrone making comeback to UFC after suffering defeat from Conor Mcgregor at UFC 246. ESPN hold the official coverage rights for the event no tv money paid to UFC fighters.