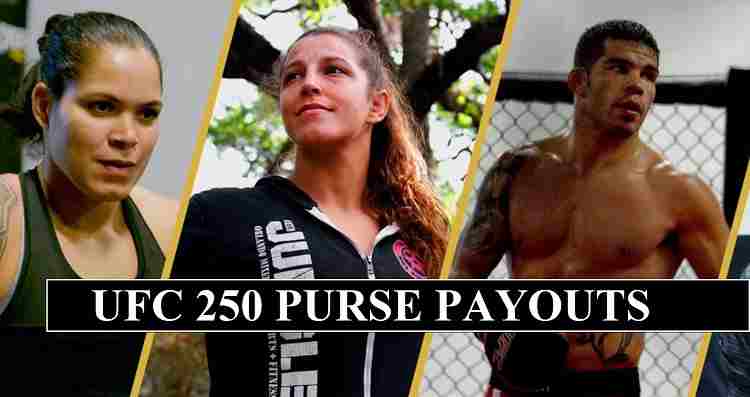 UFC 250 fight card announced and confirmed for 6th June 2020. The details for the possible venue announced officially according to mma sources, the fights take place at (UFC Apex center) in Las Vegas, United States. Earlier, the UFC 250 confirmed for April but due to corona-virus pandemic dates and venues changed for all events. UFC 250 Salaries payouts confirmed, according to reports, Amanda Nunes will earn career highest purse money upto $500,000 as she was defending her title against Spencer.

Felicia Spencer fight earnings increased after winning from ($18,000). According to details, Spencer will make maximum $210,000 from the fight only if she managed to defeat her opponent. Cody Garbrandt, Raphael Assunção and Cory Sandhagen will earn money between ($80k-$100k) each. The sponsorship bonus will be maximum for Amanda Nunes, previously a news source reported main card fighter earn $20k-$40k from sponsorship.

The best paid fighter in Early preliminary card may be (Jussier Formiga). Formiga earned ($49,000) guaranteed salary in his previous fight. Neil Magny and Sean O’Malley both were taking part in their 2nd fight after UFC 248. Once the pay-per-view take place, the details of all fighters based on their performance bonus and fight of the night bonus updated here.

The UFC 250 salaries payouts of each fighter based on their recently held fights. The details will be changed after winning bonus, performance bonus and sponsorship bonus of each fighter confirmed. All information gathered from top sources of MMA and UFC.