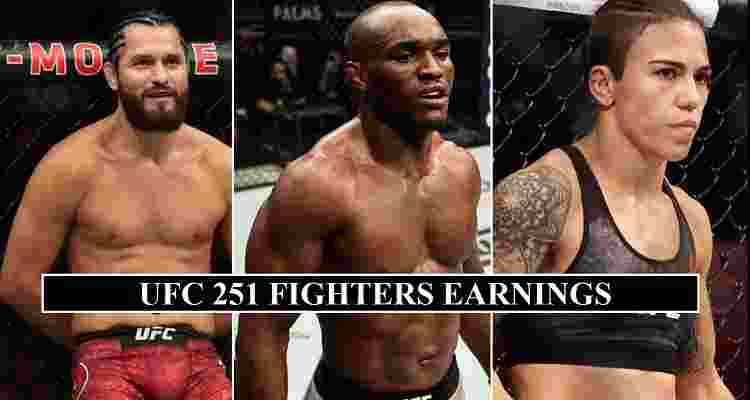 UFC 251, currently the biggest fight card set after UFC 250. According to reports, two title fights confirmed. Kamaru Usman defend his welterweight title against (Jorge Masvidal). They both earned $500k for their previous fights, it’s not confirmed so far how much do they get paid for UFC 251. But as far as their fight popularity, Usman earned ($500k) straight money while his opponent (Jorge Masvidal) might get paid $350k this time as the event take place behind close doors. UFC 251 salaries and purse payouts will be more than previous event UFC 250 and fight night (ESPN on 12).

UFC fighters get paid extra, which based on the sale of pay-per-view and gateway income. But corona-virus pandemic changed every thing no audience will attend the fight. Jose Aldo, Max Holloway, and Paige VanZant, Jéssica Andrade and Alexander Volkanovski will make big money from the UFC 251 pay-per-view.

In the above table, the fighters salaries gathered from trusted sources, The fighters who are making debut earn ($12,000) to show and $12,000 as of winning bonus. Their sponsorship earnings not exceed more $3,500 from the first fight. Raulian Paiva and Vanessa Melo both missed their weight which means 20% to 30% of their purse money paid to their opponents at UFC 251.

The salaries information of each fighter updated. This is the best payday for the fighters with UFC Promotional Guidelines Compliance which is distributed among the fighters upto $305,000. The second highest purse money paid after Conor Mcgregor to Usman Kamaru upto ($600,000).

Once the event fights completed, the detail UFC 251 salaries purse payouts information based on promotional bonus and performance night bonus updated here. Currently data based on these fighters previous salaries, Kamaru Usman will be the only fighter received $500k after Jon Jones.