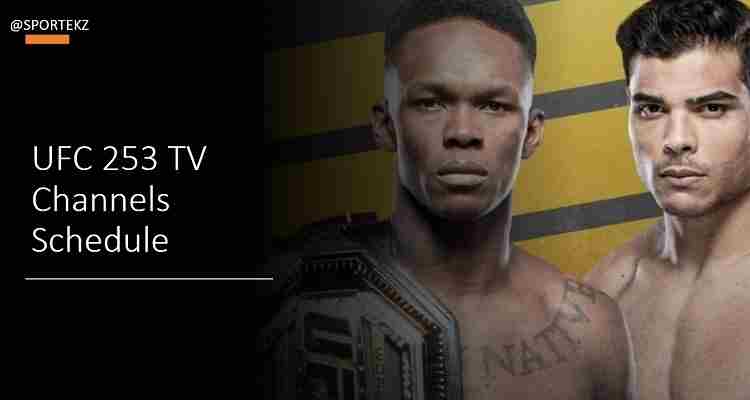 The last week of September 2020 arrived and the main pay-per-view event (UFC 253) announced. The UFC 253 fight card announced, according to reports there are two title fights take place in middleweight division and light heavyweight division. UFC 253 stream channels for the main-event and preliminary card announced.

Israel Adesanya is returning to UFC ring after five months of his previous main-event bout with (Yoel Romero). He will defend the UFC middleweight title against Paul Costa. The co-main event bout announced between Dominick Reyes and Jan Błachowicz for the vacant UFC lightweight title. Third title fight cancelled between Cláudia Gadelha and Yan Xiaonan for (women’s strawweight Championship) due to Cláudia Gadelha knee injury.

Dana White, The UFC boss recently predict that Paul Costa and Israel Adesanya will produce one of the best mixed marital arts bout in 2020. According to him, this may be the fight of the year. In the above table details regarding to UFC 253 stream tv broadcasters based on the channels that hold rights for UFC main pay-per-view in their territories. The next PPV UFC 254 fight card announced.

In India the coverage of UFC 253 may avalible on Sony TEN 2 or Sony TEN 3, these channels recently show (UFC Vegas 3) broadcast. Viaplay broadcast the fights of UFC 253 in (Sweden, Norway, Finland). Recently TV 3 hold rights for Baltic nations and provide live coverage of UFC pay-per-views. If any changes made to the current UFC 253 tv broadcasters or any new channel bought the rights the details will be updated here later. The coverage of the main event began at (10 pm ET) in United States.