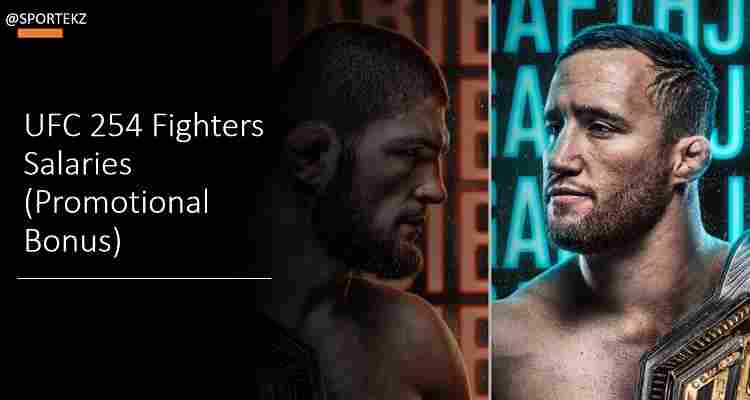 The biggest pay-per-view card announced, UFC 254 all fights confirmed the main event take place between Khabib Nurmagomedov and Justin Gaethje. The co-main event take place between ex-UFC middleweight champion (Robert Whittaker) and Jared Cannonier. There are some changes made to the card some fights remove due to covid-19 positive test and illness issues. UFC 254 salaries purse payouts based on fighters current on-going contract deal with UFC promotions.

The highest earning fighter at UFC 254 will be Khabib Nurmagomedov, he will not received any winning bonus money but straight payout ($3 million). Justin Gaethje if manage to pull victory against Russian fighter will earn $750,000 in case suffer lost at UFC 254 will get paid guaranteed $600,000.

Robert Whittaker will be among third top paid fighter at UFC 254, will received $100,000 bonus payout if win the fight. His opponent (Jared Cannonier) will earn $90k guaranteed and earnings will be increase to $180k based on winning bonus.

Further UFC 254 salaries purse for the fighters mention in the above table, complete details regarding to the fighters payout updated after their matches. ESPN provide UFC 254 tv coverage in United Kingdom, if you can not get access or you country not listed for UFC pay-per-view fight cards. UFC fight pass provide live coverage worldwide (Khabib vs Gaethje) main-card and preliminary cards. The next pay-per-view confirmed by Dana White for (UFC 255).