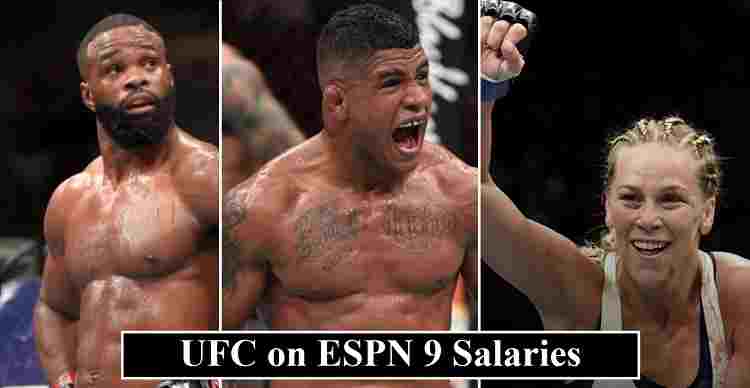 UFC planned pay-per-view events behind the close door taking place. Tyron Woodley seen in action in the main pay-per-view card against Gilbert Burns. UFC on ESPN 9 salaries and payouts confirmed for some fighter as they receive straight money no winning bonus. The four fighters received $50,000 for performance of the night and fight of the night bonus. Tyron Woodley earn maximum salary, according to reports he will earn $350,000 for the upcoming pay-per-view.

Gilbert Burns, will make career highest purse money from the fight. A source revealed, Burns received $85,000 to show and $85,000 for winning the fight. Once all the fight take place, fighters salaries and sponsorship bonus details updated here.

Some fighters get paid pay-per-view revenue, but the fight take place without audience there is no ppv bonus for the UFC fighters currently but they received sponsorship bonus from $3,500 to $20,000. All information that based on UFC on ESPN 9 salaries payouts and guaranteed purse money gathered from trusted sources of mixed martial arts.

Note: some fighters salaries were based on their previous fight earnings. UFC on ESPN 9, fight card mostly fighters were making their debut. Their earnings from the events not exceed more than $10k to $36k guaranteed money. More details updated here, once the all fighters salaries confirmed.