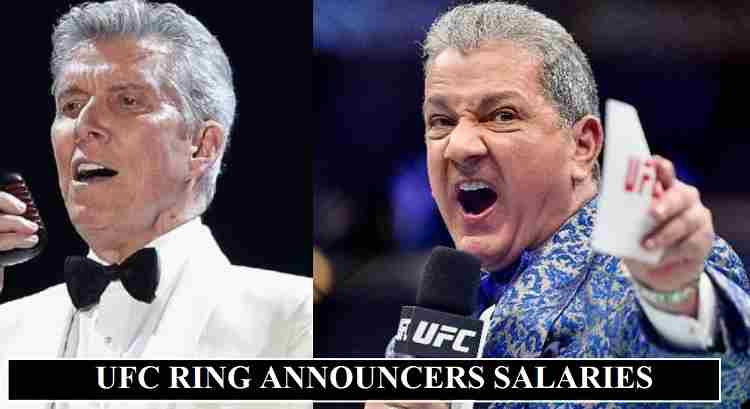 Ring announcer are the ones who introduce the fighters and also results of the fight. How much a ring announcer earn in UFC. A report in 2019, released about the UFC ring announcers salaries, according to which a ($100,000) paid maximum and $10,000 minimum. Not all announcer get paid so much, some pay lower than $10k even in pay-per-views.

In the above table you can see the UFC ring announcers salaries for the year 2020. The information gathered from reported salaries in year 2018 and 2019. TSM Sportz revealed that a ring announcer at the end of each year $500,000. Sports Payroll report claimed ring announcer earn $250,000 maximum each year.

Professional Ring Announcers PPV Salary ($50,000) : Talking about professional ring announcers, they are on contract with sports organization. Such as Bruce Buffer, Joey Rogan and Michael Buffer, they selected for the top main pay-per-view event announcements earned between $50,000 – $100,000 at the end of the event claimed by sources.

Part Time Ring Announcers Salary ($2,500) : Entry-level ring announcers not on contract. They get selected for the announcement for the preliminary card and extra preliminary cards. Once they get 2-3 years of experienced offered contract by the professional sports organization such as (Bellator & UFC) for ring announcement and post fight interviews.

Who are the best paid Ring announcers in UFC. In 2019, a report claimed that Michael Buffer earn upto $50k for the ring announcement role during the UFC event main card event (Frank Mir vs Brock Lesnar). Bruce Buffer highest paid ring announcer, he earned $1 million in one year from Boxing, UFC, Wrestling and other sports announcement jobs. All information in the above table you see, gathered from trusted sources MMA, Boxing, and American sports.