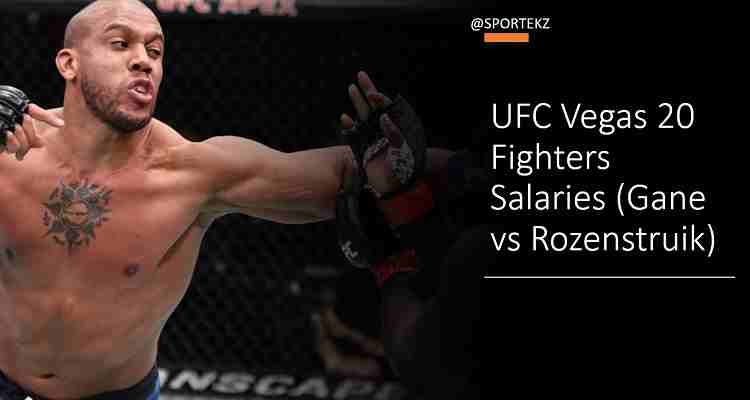 In the last week of February 2021, Light heavyweight bout between Ciryl Gane and Jairzinho Rozenstruik announced, it been reported that the fight take place behind close door at UFC Apex, in Los Vegas, United States. According to reports, Jairzinho Rozenstruik will be highest paid fighter alongside Magomed Ankalaev. UFC Vegas 20 salaries and purse payouts based on fighters promotional contract.

The only fight that ended without result is between Mayra Bueno Silva and Montana De La Rosa. This weekend only three fighters received UFC performance of the night bonus $150k distributed among the fighters. Only two fighters made debut at UFC Vegas 20, Ronnie Lawrence and Vince Cachero. Ronnie Lawrence received $50k for performance of the night and earned career highest purse upto $73.5k.

Complete details regarding to UFC Vegas 20 salaries and fighters purse money based on their contract updated above in the table, some fighters earn pay-per-view share which is not disclosed by fight promotions.