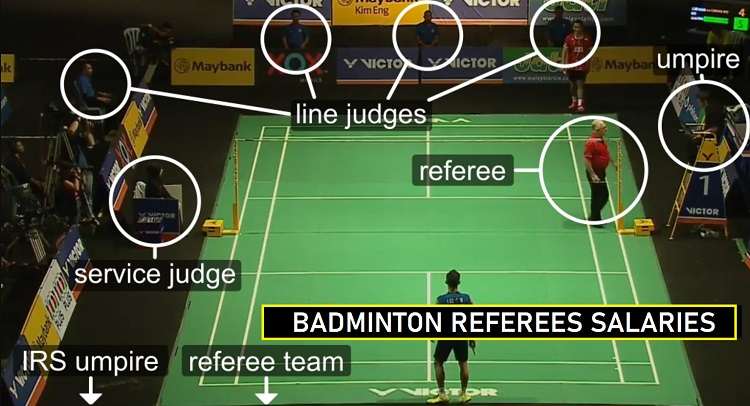 Two categories suggested for the badminton referees. In one category elite panel of officials selected who got experience of 5-6 years. They hired on professional contract on annual salary base. The second category development category where new referees selected. As per sources confirmed ($500) paid to the professional official for his duties and tournament earnings are double.

Entry level referees in badminton don’t have years of experience but once they get developed with game rules and regulation from international and domestic tournaments contracts offered to them. Entry level referee get paid ($100) only when they selected for any match.

In the above table match referees salaries in the world mention. The details taken from (Sport Richest List, The Medium and Sports Unplug). Best paid are the match umpires they have more power in the game. Line judge and service judge help them during the fouls made on lines and service.

Match Umpire Salary ($500): Match umpire plays the key role in the fairness of the game. He or she watched all the move’s on badminton court made by athletes. Umpire duty is to see that players follow all the rules and regulation set for badminton court. Match umpire earn $500 per match but when selected for Olympic game or grand-slam tournament of badminton his earnings increased to ($2000).

Line & Service Judge ($300): A line judge is the one who called for the fouls that made during the game. His duty is to make sure that shuttle touches the line not outside the line and earnings per match is ($300). Service judge look’s that player follow all rules and regulations regarding to service during the game ($300).