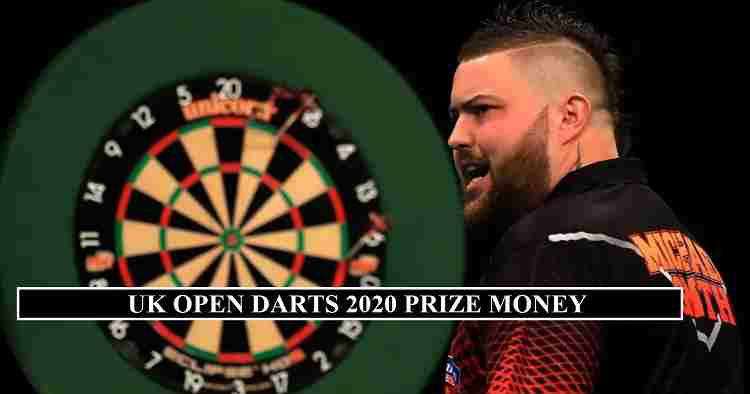 Darts next big event is (Ladbrokes UK Open) the ranking event. The event is sponsored by (Ladbrokes). The purse money for the competition increased 2% after 2018 tournament. Nathan Aspinall current defending champion of the UK Darts Open. He defeated Rob Cross in the final of UK Open 2019. UK Open 2020 prize money for the winners remain (£100,000).

Michael van Gerwen, Peter Wright, Gerwyn Price, Rob Cross, Gary Anderson and Nathan Aspinall key players to watch in UK Open 2020. The prize money for the runner-up player increased to (£40,000). Further details about the payouts for each player in UK darts open 2020 listed in the table.

The two semi finalist who lost their match will received (£20,000) payouts from the purse money. All four players who lost their quarter finals get paid (£12,500). No prize money distribution for the (Last 128 and Last 160) in the tournamnet. All 32 players who lost in the third round, received the share of (£1,000). Fourth round knockout players earn their share of (£2k). All eight players in round of sixteen received the share of (£7,500).

The 2020 UK open tv channel confirmed, according to sources (ITV4) hold the official coverage rights for the tournament. . In Netherlands the matches of UK Darts open telecast on channel (RTL7). Mostly PDC tournaments coverage rights hold by the ( RTL7) in Netherlands. Darts UK Open 2020 tv channels confirmed for Germany, Switzerland, Italy and Japan. If any changes made to the players prize money distribution for 2020 competition, details updated here later.